Moylan has no plans to follow Norman into early retirement​

Corey Norman was happy to hang up his boots this week after revealing “I was just over it” - but his good friend Matt Moylan has no plans of walking away from the game any time soon.
Moylan took a $500,000 pay cut to remain at Cronulla and the chance to work with Craig Fitzgibbon, but is free to negotiate with rivals for 2023 and beyond. Campbell Graham talks about some of the hardest hitters in the NRL.
A Kangaroos representative when surging through the ranks at Penrith, Moylan has struggled with injury the past three years, but showed glimpses of his best last season when remaining on the park for 15 games.
Moylan will back himself to land a new deal, and, while he believes Norman had more footy left in him - the five-eighth played 228 NRL games and represented Queensland - he is determined to eventually bow out of the game on his own terms.

“I’ve loved my time here [at Cronulla], and my priority is to stay here,” Moylan said. “I haven’t thought about anything beyond next season. I’ll worry about it when it comes to it. I rather focus on training all that other stuff will come.
“I’m confident in myself. I just have to keep working hard on my body and give myself an opportunity to finish the career the way I want to. 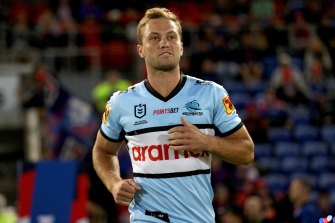 Matt Moylan is backing himself to play well and land a new deal beyond 2022.CREDIT:NRL PHOTOS
“I had a couple of lean years there. It does get really frustrating and I didn’t enjoy my footy as much because I was in and out and struggling with injuries. I knew I had to keep working hard on myself and my body.”
Moylan is expected to link with Nicho Hynes, who joins the Sharks from Melbourne, in the halves nest year. “I have a good connection with him [Hynes] already,” Moylan said. “It would be good to pick his brain after he came from such a successful club [Melbourne].

“Coming off the season he had, [the excitement] is warranted. He has worked hard and fitted in well. I’m excited to play some footy along side him. Six or seven doesn’t matter.”

Chief Sports Writer
Fitzgibbon has always had a healthy respect for Moylan and told the Herald when he started as head coach at the club: “I’d worked with ‘Moyza’ at the rep level, I was an assistant to Tim Sheens with the Australian team in 2014 and I knew what a good guy he was.
“I always respected him as a player, he turns up everywhere, and because he’s so unpredictable, opposition coaches used to feel a little bit of angst when preparing to play against him.
“I’m glad he’s backed himself for another year and, hopefully, I can help reignite that flair we all know he has.”

Norman was not offered a new deal after he finished with the Dragons. While there was talk of heading up the road on a cut-price deal at Newcastle, he made the call to focus on his YKTR clothing line.
Last edited: Dec 18, 2021

Tatus said:
Could you do me a favour and do the same for the McInnes transfer window article in the news section? Bloody pay walls
Click to expand...

I subscribe but couldn't see McInnes article to paste
R

So many fucken subscriptions, I’d imagine if they offered individual articles or 24hr access for 99c they would get lots of impulse purchase from people that are never going to subscribe

Not much for a year and not Murdoch .