HaroldBishop said:
Some people may not even think it's necessary to play Fifita now just because he's a leader, even though he contributes nothing.
Click to expand...

We are in a bad position if we are playing him. All for him seeing out the season though.

I’d hope he gets a run at home though against an easy team, so he gets the send off he deserves.

Tatus said:
We are in a bad position if we are playing him. All for him seeing out the season though.

I’d hope he gets a run at home though against an easy team, so he gets the send off he deserves.
Click to expand...

There are no easy teams, how long have you been following the Sharks mate?

Tatus said:
We are in a bad position if we are playing him. All for him seeing out the season though.

I’d hope he gets a run at home though against an easy team, so he gets the send off he deserves.
Click to expand... 'Coming for you': How Origin campaign launched Fitzgibbon-McInnes bond

Sharks recruit Cameron McInnes has recalled how new coach Craig Fitzgibbon wanted the utility forward on his books before the pair coincidently ended up at Cronulla together.

I'll raise my glass to that

HaroldBishop said:
I'll raise my glass to that
Click to expand... 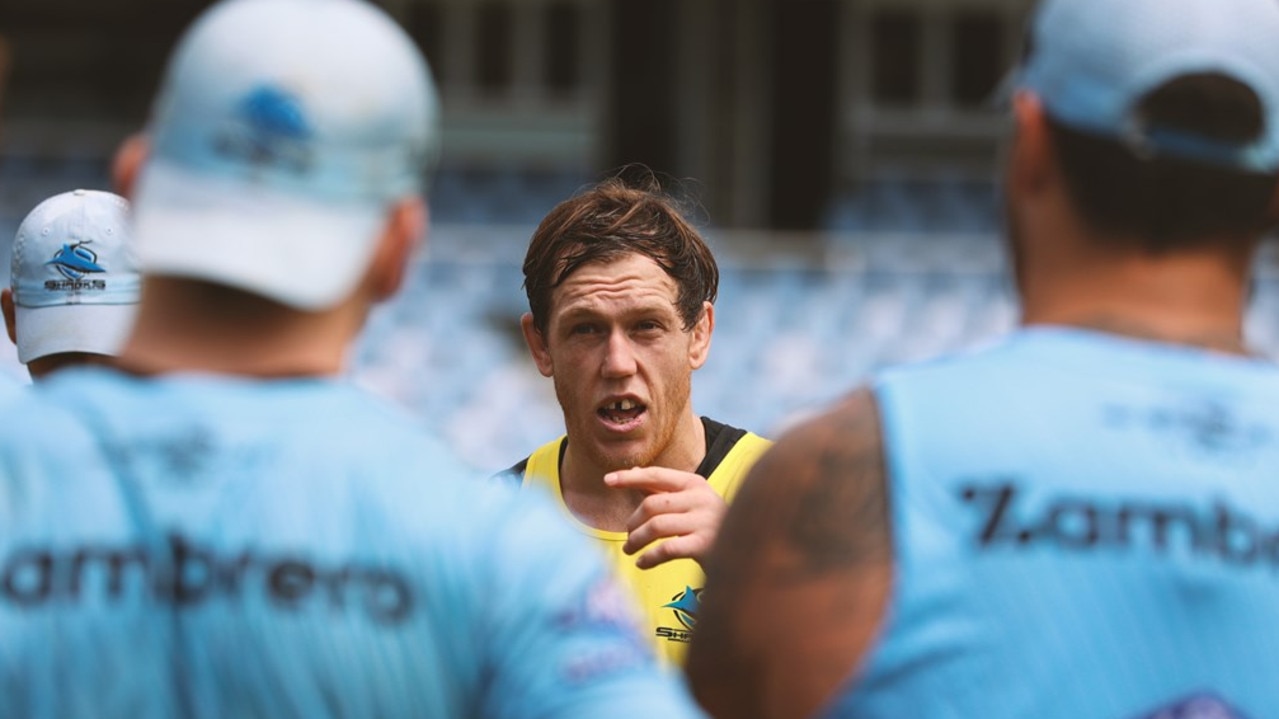 February 1st, 2022 5:53 am
Add another win to Paul Gallen’s record because star Sharks recruit Cameron McInnes has revealed the club legend is behind his missing front tooth.

No, McInnes wasn’t one of Gallen’s opponents in the boxing ring. But the two did face off on the footy field — and well, it’s clear now who came off second best.

“It’s a bit of a touchy subject for my parents because I think it would have been a month after I got my braces off. When I was 17 or 18, I got hit on my tooth and it died and went black,” McInnes recalled to Foxsports.com.au.

“I might have gotten another hit in (under) 20s when it was hanging by a thread. Then in 2015 I was at Souths and playing against the Sharks in a semi-final and ‘Gal’ ran off the kick-off. I tackled him and hit my mouth.

“I just knew it was out, but I kept it in because I had to keep playing. When we came off the field at the end of the game, I pulled it out finally and it was done.”

It’s a funny game rugby league. Gallen played 247 games of his 348-game career in Cronulla’s No.13 jersey — one of those being that September night in 2015 that McInnes only has to smile in front of a mirror to remember.

Now McInnes is set to pull on that famous No.13 Sharks jersey. There’s absolutely no hard feelings, but perhaps their close encounter will come up in conversation now that McInnes is a Shark.

“I’ve never said it to him… but he’ll find out now,” McInnes said when asked if Gallen knew.

“If it wasn’t him it would have been someone else.”

The 27-year-old is full steam ahead in his new chapter. A club switch and change in position has McInnes primed for a big season.

It’s common to hear in a pre-season interview just how keen a player is for Round 1. But it hits a little harder when it comes from McInnes — who hasn’t played a game since October, 2020.

The former Dragons skipper suffered an ACL injury two weeks shy of a year ago. He didn’t get to play a single game in his final season for the Red V, but luckily he had already secured a four-year deal with the Sharks just 10 days prior to the injury.

There was a bit of confusion over where McInnes would fit into Cronulla’s line-up given he’s played almost all of his NRL games at hooker — where local Sharks junior Blayke Brailey plays.

It was clarified at the time that he would play lock and McInnes has since confirmed that’s still very much the plan.

“When I was signed it was as a middle that can provide hooker cover and that’s how I’ve been training,” he said.

“Where that fits, whether it’s starting or on the bench, whatever it is I’ll do a lot of work in that middle role and then a bit at hooker.

“If ‘Brails’ can play every game every year, we need him to do that, he’s so influential. But if I need to spell in at times for whatever reason, I can.” The latter two were signed by Ftizgibbon, but McInnes was actually lured to the Shire by ex-coach John Morris, who was axed five weeks into the season.

McInnes was happy to play under Morris — he wouldn’t have signed if he wasn’t. But he was “over the moon” when Fitzgibbon signed on to lead the Sharks in 2022.

“I’m all for John Morris, he was so good to me throughout the process and when I did my knee he messaged me, so he was really good,” McInnes said.

“Coming to the club I had all intentions to have a great relationship with him, but that’s just how it’s worked out and I wish him the best.

“But when ‘Fitzy’ was announced as coach, I was over the moon because I got to have five weeks with him at Origin camp at the end of 2020 and I learnt so much from him even in just those five weeks.

“I didn’t get the opportunity to play (for New South Wales) but I took so much from that camp.

“Since I’ve been here now, I’ve learnt so much again. He’s been successful everywhere he’s been. The way he does things, it works.”

So unlike Hynes, who recently opened up on how Fitzgibbon was a big reason he signed with the Sharks, there were other factors that drew McInnes in.

“There’s a lot of reasons (I signed). For me when I met with the club, it was the direction of the club, where it was heading — and this was even prior to ‘Fitzy’ being appointed coach — that’s a bonus,” he said.

“I was really excited by the squad. Obviously playing for the Dragons previously, every time we played the Sharks it was always a great game.

“There’s so much young talent in this squad that I can see growing over the next few years and I’m lucky enough to be probably an older head in that group now.

“Then with ‘Fitzy’ coming, Dale and Nicho, it’s just bonuses on top.”

McInnes confirmed it was the Sharks that approached him first, saying he was “lucky enough” to have a club show interest in him as he was coming off contract.

The Dragons indicated at the time that a deal between the two parties couldn’t be agreed upon.

“With our club going through a significant transition it’s fair to say that Cameron and the club were working on different time frames,” Dragons’ general manager of football Ben Haran said in a club statement confirming McInnes’ exit.

“We understood why he wanted his future sorted immediately, which has since led to Cameron and his family securing an opportunity elsewhere.”

The two-time Dragons Player of the Year said the club was “good with everything” and supported his decision.

“They understood my decision and were supportive,” he said.

“I didn’t get to finish there in the right way but they were so supportive of me throughout the whole process.”

McInnes ended up cutting ties with the Dragons earlier than expected when the Sharks took over his injury rehab around July last year when the competition relocated to Queensland amid the Sydney Covid-19 outbreak.

That meant come time for players to return for pre-season training McInnes wasn’t really a newbie. In fact, he was at Sharks headquarters almost daily with skipper Wade Graham who stayed behind in Sydney after repeated head knocks.

While McInnes appreciated the time he got to spend with his family while out injured, as well as the opportunity to settle in at his new club earlier, he also desperately missed playing footy.

So much so he barely watched any games last season.

“To be honest I only watched the Dragons games and the Sharks games,” he said.

“They were the only two games I’d watch a week and they were tough watches... Just because I was missing playing so much.”

Asked who he supported when the two rivals went up against each other McInnes admitted: “I was still a Dragon... but I had an eye on both teams.”

Sharks fans can rest assured though that they’ve got both of McInnes’ eyes now.

“When I was at the Dragons, they were my heart and soul, so the Sharks were a rival,” he said.

“Now the Dragons are going to be a fierce rival and the Sharks have my heart and soul. That’s just how it is.”
Click to expand...

Where'd you get that from? Last update I can find was an hour ago and still had him as a week2 trial starter.

Sparkles said:
Where'd you get that from? Last update I can find was an hour ago and still had him as a week2 trial starter.
Click to expand...

surgery, out for 4 weeks

snowman said:
surgery, out for 4 weeks
Click to expand...