Signed a train and trial just a week or so ago, came into the bubble on Sunday and has now been promoted into the full squad for remainder of the year, is eligible for selection later today for this weekend even

The Sharks have bolstered their playing roster for the final rounds of the 2021 season with the signing of former Titans and Raiders forward Kai O’Donnell.

A back rower/lock, the Brisbane born O'Donnell played his junior rugby league in Proserpine before being signed by the Titans and moving to the Gold Coast and the Palm Beach Currumbin High School.

In 2018, O'Donnell made his senior rugby league debut for the Burleigh Bears in the Queensland Cup, then at the start of the 2019 season was a member of the Gold Coast Titans squad in a pre-season trial match against the North Queensland Cowboys.

In April of 2019 he made a move to the Raiders, playing in their under-20’s Jersey Flegg side, O’Donnell starting at second-row in Canberra's Grand Final loss to the South Sydney Rabbitohs.

O’Donnell travelled to Perth as a member of the Raiders' NRL Nines squad early in 2020, before making his NRL debut in round nine in a match against the Melbourne Storm.

He would play four games during that 2020 season, one of those coming in round 20 against the Sharks where he scored his first try in the top grade during a 38-28 Raiders victory.

Released by the Raiders mid way through the 2021 season, O'Donnell joined Queensland Cup team the Mackay Cutters, playing just one game before the recent competition disruptions.

The 22-year-old O’Donnell came into the Sharks Queensland bubble on Sunday and will be in line to be included in their 21-man squad to play the Newcastle Knights this weekend.

His contract is for the remainder of the 2021 season.

Anyone know what style a forward he is? Workhorse? Enforcer?

Originally recruited by Gold Coast he went through Palm Beach before shift to Raiders.

Won Raiders 2019 Flegg Coaches Award and debuted for them last year. They do have a pretty stacked forward pack so not surprised he hasn't had much luck this year.

Played for Burleigh so Burgess will have something to add probably.
Looks pretty mobile and seems to have played edge and 13, also in a vid mentions he doesn't mind filling into hooker if needed. 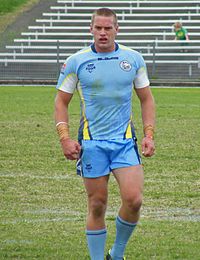 Hope he can tackle.

I spy with my little Kai

Pretty big, but light. Reckon he will go ok but.
B

This bloke aye - didn't we already give him a go and he was pants
Click to expand...

That conversation has already been had in the signings thread. Kyle was a dud. Kai is decent imo.

Was a gun junior. Was a bench forward at Burleigh when he was 19. Can play edge or middle. Similar to Jack Williams in body shape these days. Ball of muscle.

He looked a bit under-done in the one game he's played this year in Q Cup, but that isn't surprising given how much footy has been missed by fringe/depth guys in his situation.

Here's an interview from a Raiders podcast around this time last year which gives a bit of background
https://www.raiders.com.au/news/2020/08/05/behind-the-limelight-kai-odonnell/

Since he played at PBC, I wouldn't be surprised if he ends up on Jackson Whale's podcast eventually (same bloke who did the interview with Rivett) so keep an ear out for that.

thanks for the info regardless though

Put him straight on the bench

Made for Origin
A

No Tolman and almost certainly no Fifita. This fella is odds on to get a game this week you’d think.

I reckon your right .
We might have to find a decent centre and send Talakai back to forwards with the injury toll there

Reckon better chance we play Tolman than Fifita at the moment

Edit: I take that back, apparently swelling down enough to bring him back out of coma and they are discussing surgery options. So I’ll put him and Tolman back on level chances

Is Wilton any chance this week ?

bort said:
apparently swelling down enough to bring him back out of coma and they are discussing surgery options
Click to expand...

This is good news.
B

Super Impose said:
Is Wilton any chance this week ?
Click to expand...

Hunt still outside the bubble though.

Hunt still outside the bubble though.
Click to expand...

Interesting on Hunt, he was quoted as saying he would head up after the weekend the kid was born and go back in the bubble. Something changed clearly.